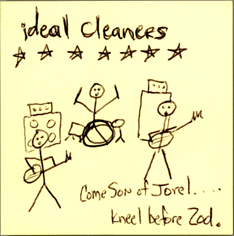 Ideal Cleaners is in Lincoln, NE. Over in the Eastridge neighborhood.

We’ve released the following, all on SPEED! Nebraska Records:

About the band: We’re open minded enough to appreciate both expensive Belgian Ales and Miller High Life, although we disagree on which is preferred. This inner band conflict comes out as loud, aggressive rock music. We are loud, we are weathered, and we are sexy. We want to rock you. (But only for about 35 minutes.)

We usually play for as little money and for as few people as possible. If you know of any sweet gigs that fit those criteria, please give us a call.